This hot pot themed restaurant located on 194 Grand Street is one like no other. When you walk into the Hometown Hotpot & BBQ tables topped with gargantuan steaming hot pots of soup welcome you, as well as long plates of food. Friendly waiters greet people at the door, who are quickly led to a table. On the left is a raised platform with a ramp leading up to a long prow of tables, as well as a stairway leading to more seats downstairs.

The ambiance of the hotpot restaurant suggested a provincial environment. Below are two pictures of the room and menu at the Hometown Hotpot & BBQ. The decorations on the wall are simple. as is the design on the menu. On the wall hangings a wire decoration depicting different images, such as a child riding a bicycle. Realistic granite bricks line the edges of the room, giving the restaurant a natural, country-like image. The white tables are also very simple and plain. Overall, the decor emits a very rural, simple, style aura, which matches the preference of old-fashioned cooking in the pot at the table. 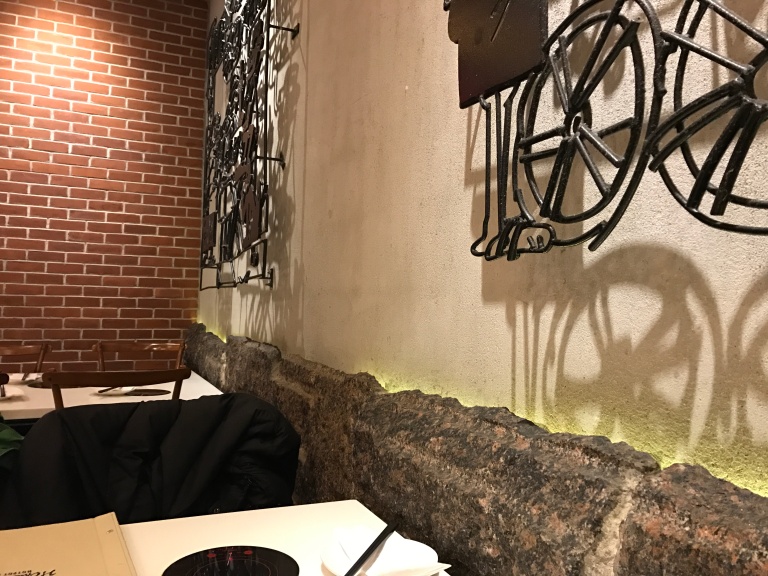 The entrees and appetizers that I tasted were beef, fried tofu skin, multiple vegetable varieties, and chicken dumplings. Frozen blocks of ramen and udon were also served. Sauces are accessible at a sauce bar, as shown in the picture below. Three miniature bowls in a row are provided for people who would like to spice up their food. My personal favorite entree and appetizers was the beef, chicken dumplings, and udon, especially with a dash of soy sauce. A tip for people who try these dishes: the dumplings take much longer than all of the other dishes to boil and simmer to well down. Try to let them cook for 5-10 minutes at the middle of high level, because the low heat will take much longer. For dessert, two different types of sweet soups, or tapioca, are served adjacent to the sauce bar. People can use large spoons  to scoop up either a red bean tapioca or a blend of yam, coconut, taro, and tapioca called “momo chacha,” a Malaysian specialty. I especially found both of these soups especially pleasing, as they were mild and not as strong as other tapioca soups I had tasted.

I, personally, would recommend dining at a hotpot restaurant only in a large group due to the colossal amount of food served per order, as shown in some of the pictures below. Eating at this hotpot restaurant is also more beneficial to each diner in a large group because it allows every person to try and experience more. This restaurant is also only profitable or customer if you enjoy heavy meals because, after all, it is an “all you can eat” hot pot. Having more people to dine with also allows you to purchase a main pot in the center with as many soups you want. However, there are some smaller tables for two as well. I would definitely recommend this to people who would like to eat out with friends. It is a cost-efficient, friendly, and serves decent food. Four out of five stars!