If you shoot up to outer space in your little space rocket, and you peer through the window, you will see a vast variety of different planets and stars, of all different colors and sizes. But, there really is one place you could call home, and that’s Earth. You aren’t going to look for 4910 Ave T Westbrooke, Montana, all the way up there, are you? Earth is home to you, your family, and another 7.5 billion people. So how is our Earth doing? Not so hot? Yeah, that’s not the case.

What am I talking about? I am talking about yet another threat to mankind and our planet. The Earth is so big, that us humans cannot possibly affect it, right? Wrong. Sea levels are rising approximately 3.5 millimeters since the 1990’s, and the ocean temperatures will increase by 3.6 degrees Fahrenheit in the next hundred years. In the last century alone, the sea levels rose 6.7 inches. Since 1994, Earth lost 400,000,000,000 TONS of glaciers alone, per year! Ten out of the last thirteen years were the hottest years on record. Well, I’ll stop here for now, because you probably get the point. We can no longer avoid it – Global warming isn’t a joke; it affects Earth way, way, WAY more than you think.

The Earth has formed roughly around 4.6 billion years ago. Objects in space (ex: asteroids) started colliding to form our home. As time progressed, the Earth gradually cooled, which gave it an evened-out and balanced temperature, which allowed oceans to form, and life to exist. Blue oceans, green land – you know, the works.

Our planet has given us so much that we’ve all forgotten the importance of it. Ergo, more and more people are beginning to take advantage of it. We are so focused on the human discovery and the new iPhone 8 that we forgot our own planet’s needs. We lost track of what’s important. Not that human discovery isn’t – it’s just that we have to be more aware of how our actions are affecting the planet. Want a few more examples? Wow, I’m glad that you’re brave enough to hear them.

I’m not gonna spend a ton of time on this because you’ve probably heard it a lot. Greenhouse gases are atmospheric gases that trap and emit radiation back down to the surface of the Earth. We do need greenhouse gases, but an excess is dangerous. The greenhouse effect is the process in which this happens. As you can see on the left of the page, there is a pie chart indicating greenhouse gas emissions in the U.S. It shows how and where greenhouse gases, or GHG’s, are being released into the atmosphere. Some examples of greenhouse gases are water vapor, carbon dioxide, methane, nitrous oxide, ozone, etc.

These greenhouse gases are emitted from factories and power plants. The carbon released from these huge facilities turn into methane. It “has many times the warming potential that carbon dioxide”. This can lead to the extinction of 20-50% of the world’s animal species.

A slight increase in temperature makes no difference to the living creatures, right? Dead wrong about that. A small rise is enough for the sea to swallow up cities and islands. A small temperature rise in the ocean can kill many species of fish in no time. In fact, scientists claim that rising sea temperatures could kill 90% of coral reefs.  This is because climate change can affect living creatures’ ability to adapt to its ecosystem.

After existing for about a 1000 years, the northern portion of the Larsen B ice shelf in Antarctica fell apart in between the January and March of 2002. The area of the whole entire ice shelf is 625 square miles, and about 1640 feet thick (at its thickest point).

The occurrence of heat waves has increased in the past 30-40 years. Wanna hear something scary? Heat waves are accountable for more annual deaths than lightning, tornadoes, hurricanes, earthquakes, and floods combined. Imagine how many people were killed because of rising temperatures. I know I don’t want to.

This may seem completely irrelevant, but temperature increases can lead to a lower global economy rate. Global warming can leave the global GDP (gross domestic product) 23% lower in 83 years.

Okay, so you got all of the facts. We should be doing a lot about this crisis. Our Earth has a long-term sickness that worsens over the years, and we are already seeing a lot of symptoms. We are the Earth’s caretakers. If we don’t help it out, then who will?

Scientists worldwide are spreading awareness, and taking action to try to stop this crisis from getting any worse. I know one person who isn’t taking this seriously: 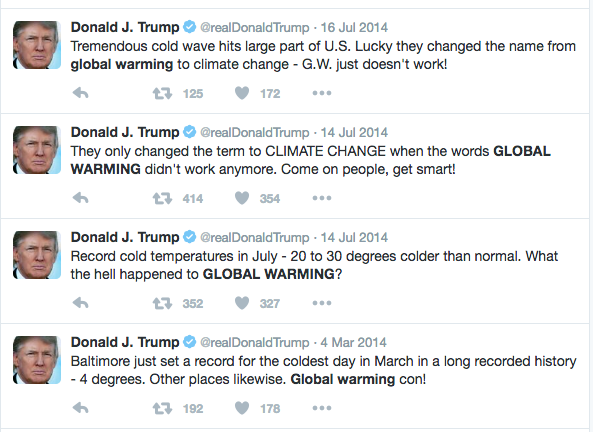 The topic of global warming became a political topic, although it shouldn’t be one. “Global warming is a moral issue, not a political one”. If we are so concentrated on our economy, how are we going to help our planet? Earth is the one and only place, so far, that there is a definite confirmation that human life exists. It’s our only hope. World leaders and scientists worldwide have agreed that global warming is a manmade issue, and action should be taken for it to be stopped. Our leader, in our country, has canceled all of President Barack Obama’s Environmental Acts that he set up with the Environmental Protection Agency just so businesses could grow. Of course, our economy is a priority, but Earth should be first.

So, how can we help? The first step is to spread awareness. People may think this is corny and embarrassing, but if we don’t spread the word about what is going on, then who will? Next, try to “power your home with renewable energy”. Look at your electric bill – when I saw mine, I was surprised. Try saving energy: turning off the TV when you’re not watching it, turn off your lamp when you’re not using it, etc. Plant trees near your neighborhood, and try to get others to do the same. For more ways to prevent global warming, go to:

Global warming is something that we should all take an honest look at. We are all doing things that are hurting our planet. We are all wasting energy one way or another. There is no one person to blame. But, we all have to take the blame for this. Why not change some of your habits?

Can one person really make a difference? Well, we’ll just have to try and see.

2 Replies to “Determining Our Future; The Bitter Reality About A Heated Problem by Raisa Z., 602”