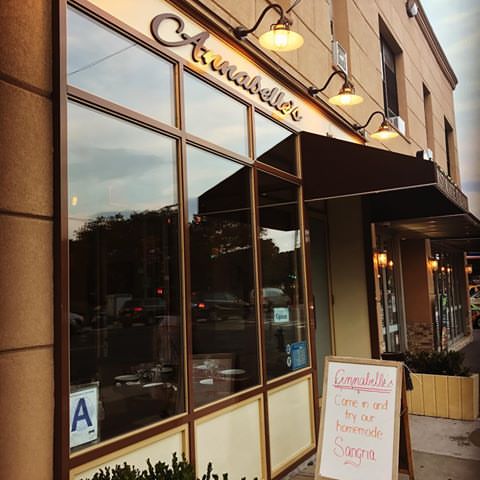 I recently tried this restaurant for my birthday, during the Thanksgiving break. It is filled with delicious Italian inspired pasta and a variety of antipasto dishes. You may think that this restaurant is similar to Gino’s but it is NOT SIMILAR AT ALL. My mom recently broke the news to me that the pasta at Gino’s is not fresh and it is from the box. This has caused me to bring down the rating for Gino’s from a 9.2 to approximately a 7.5. This restaurant actually sells fresh pasta and pizza, instantly winning my respect. I was extremely impressed at the various gourmet dishes I tried.
Before we ordered the appetizers, the courteous waitress delivered a basket filled with slices of amazing, fresh, bread. Each slice was very consistently cooked and flaky and crispy. Every piece was simply delectable and buttery. I was even worried that I was going to get full and not be able to eat any appetizers and entrees. I then ordered zucchini fries and crispy calamari. The zucchini fries were properly julienned and not greasy. The crust was golden-brown and crispy throughout. The breading did not fall off and the zucchini was a perfect al dente. The calamari was also spectacular because it was so delicious that it was almost creamy in a way. The breading was properly flavored and had a slight tanginess to it that I was very fond of. The crispiness—–just like the zucchini fries—–were on point. I rarely ever try soup from restaurants because they tend to be too creamy for my palate, but the Italian to English translation of pasta fagioli (pasta & beans) spoke to me. The cylinder like pasta in the rich (not creamy) broth was perfectly al dente and felt like a very homey dish. The broth was flavored with many nuances of flavor that enhanced the white beans greatly. The appetizers gave me a stupendous impression of this restaurant so far. Now we move on to the entrees and pizza section.

I only went here once, so we got one pie of pizza only. It was called the Grilled Veggie Fontína. It consisted of grilled eggplant, zucchini, and portabella mushrooms and caramelized, diced red onions and fontina. The vegetables had a delicious char on them and had impressive, diamond grill marks that every accomplished chef dreams of doing. The vegetables were amazing and smokey and are perfectly al dente. The cheese seemed as if it was blow-torched, along with the mozzarella, making the whole slice tangy, sour, and even a little salty, which felt a little strange. The eggplant had some slight bitter notes and the mushrooms were earthy and meaty at the same time. The zucchini was crisp and fresh and vibrant. The onions were sweet and salty and the pizza crust was crispy and not over or underdone. One entree I selected was the Frutti de Mare. It is a seafood spaghetti with clams, shrimp, and calamari bathed in a comforting, yet spicy heirloom tomato based sauce. The clams were perfect—-all the shells had opened up and were great in both texture and flavor. The shrimp just oozed sophistication and awesomeness and were so tender. However, the calamari were somewhat rubbery because of possible over-poaching. The pasta was amazing and so robust in flavor due to the incorporation into the sauce and had a little bite to it, which was good. The sauce not as spicy as it could have been, due to an ugly restaurant stereotype that apparently all kids can’t handle spice. Some kids might not be able to, but neither can some adults. Next, I tried the mushroom lasagna, which had porcini and shiitake mushroom layers smothered in a Périgord black and Piedmont white truffle cream sauce. The porcini mushrooms are a tiny variety that are so 3 dimensional in flavor and in this case, they are no different. The shiitake mushrooms are another small variety where the stems are inedibly fibrous, so for better flavor, the chefs in this restaurant put the stems in a stock to flavor the truffle cream sauce and took them out later, which was a good move on their part. The lasagna was layered evenly and very flavorful, however, the sauce was very seized up and should have been reduced in the cast iron a little bit less, to make it smoother. There were no desserts that I tried because there was only cheesecake and you know how I feel about cheesecake. Also, the only other option was a tiramisu which contained alcohol so that was out.

Although this restaurant does not have a wide selection of desserts, I feel that they portray Italian cuisine pretty well throughout the appetizers and entrees. I now give the appetizers, a 10 out of 10, the pizza, a 9.5, and the entrees, an 8.9. When averaging these values for each course, I get an overall mean of approximately 9.5, so I will definitely be going back to this restaurant again!

For those who are considering visiting this restaurant, its address is :